Last Sunday for the first time ever my 100% dependable BRP let me down.
Pulling away gently up a slight muddy slope it started to make a funny noise, not unsimilar to when a chain comes off its sprockets. I hit the kill switch looked down and all seemed ok. When I went to kick it through it locked solid. I reversed it back slightly in gear and it moved a little before locking again. This went on a bit but I concluded it was game over for the day. A 15mile tow from another bike back to my van and that was my day done. Fearing the worse and hoping for the best I started the strip down.All looked good including the oil until I took the head off. 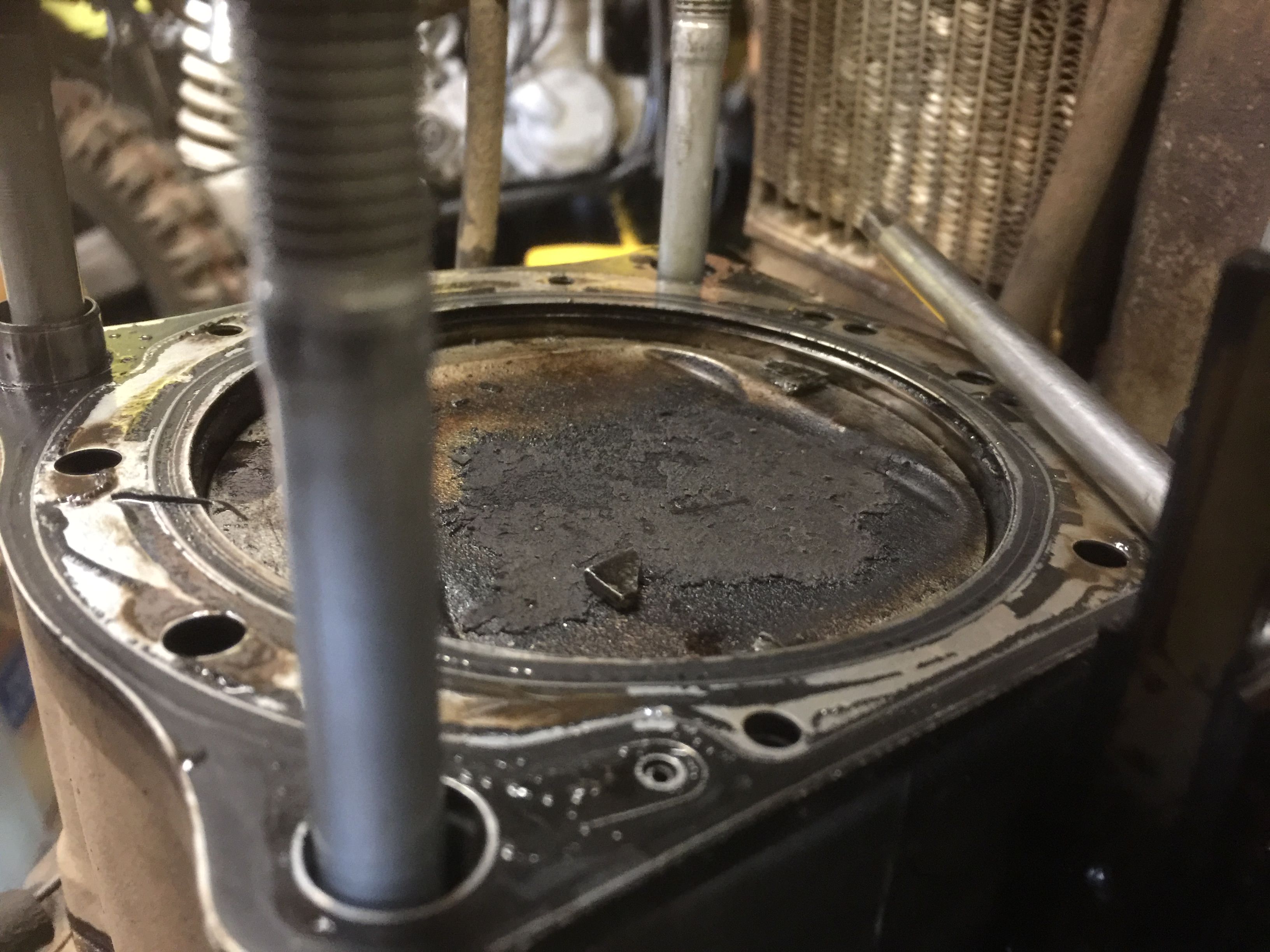 There was a few bits of metal that can be sen in the photo resting on the piston.
Sure enough when I rotated the crack the engine was now free. The problem has been found but where the hell had the bits come from.
Logic said that it would have had to come in through the inlet valves, sure enough a part of the throttle slide had broken off. 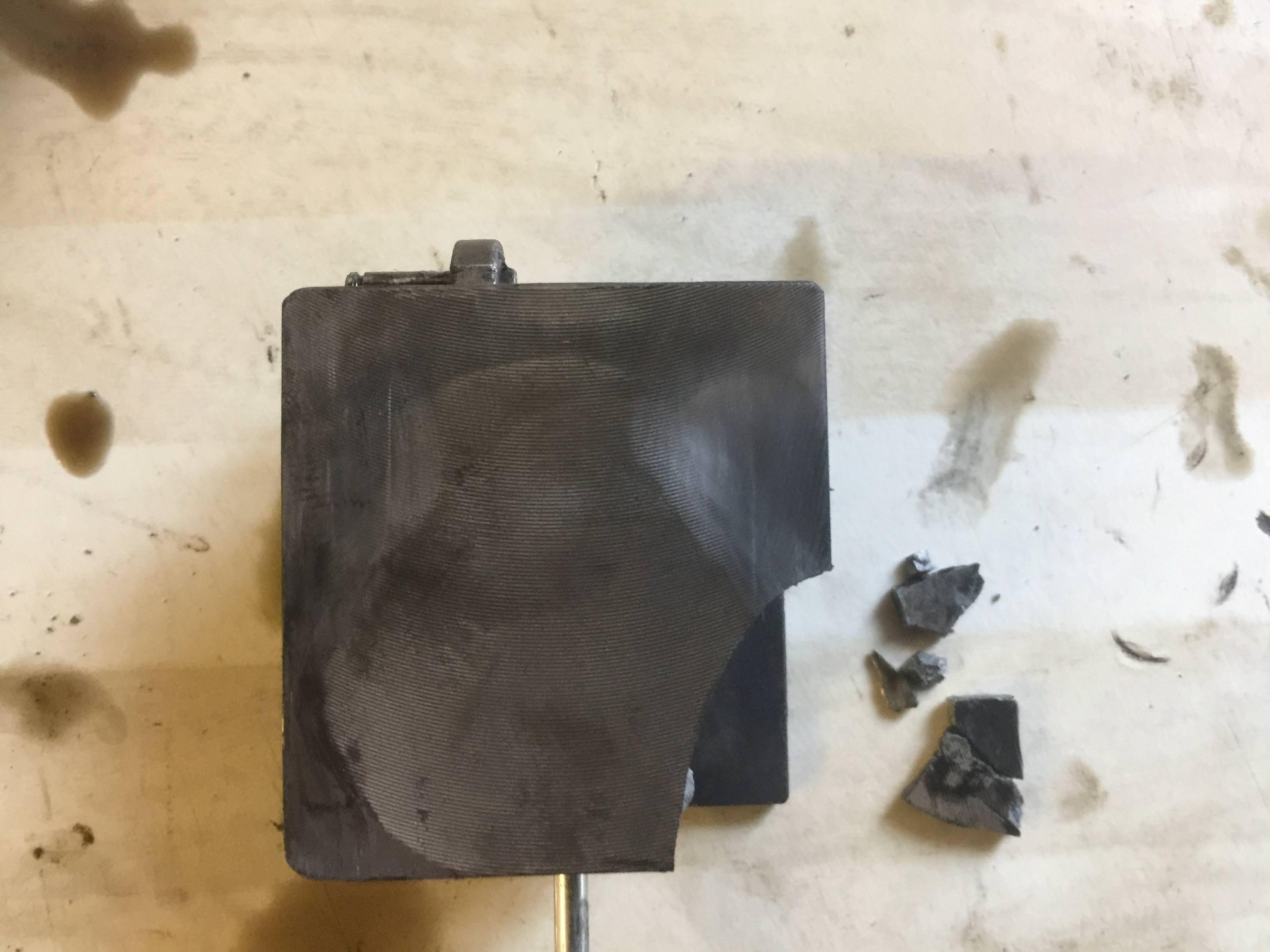 It's not really clear in the photo but the opposite side of the slide has a crack in it as well.
Some suggested on the US Facebook page that it was caused by a backfire due to inlet valve clearance. I am fairly sure that the clearance was ok as I checked them recently and they had not moved from the previous time. The clearances will certainly be spot on when I rebuild it. A web search showed up users with snow mobiles having similar issues with the mikuni carbs and there the suggestion was that the slide was weakened due to wear. As can be seen in the photo there is definitely some wear the cracked side of the slide but the air filter side looks the same as it came out of the factory.

My faith in Honda is restored with the well used engine showing virtually no wear. A gasket set will be the only cost there. I fitted the mikuni not them. No slide in stock with the UK Mikuni importer so a 2-3 week wait and a £80 bill for the part. So if you are running the TM it has to be worth checking the slide every so often. I will refit the mikuni because the pumper is ideal for the riding I do but will resurrect the original to refresh my memory of its short comings. I will also research the FCR option to see if there are any good jet set up around there.

Mauser wrote:Wow Hew....not good start to 2018 but could have been a lot worse....you could have been doing 60 when it let go ?.....what actal locked up the debris between the piston and the head ?

It was the end to 2017 really as it was New Years Eve. I'd stopped the bike because of the funny noise which I now guess was air escaping in the carb. It was when I was kicking the bike through to restart it that it locked. Yes it was the bits of slide pressed between the piston and the head that was locking the engine.
As I was only kicking the bike over and did not force it no damage was done to the engine.
Down side is a 2 to 3 week wait for the slide which is on back order. Hunting the all the bits to refit the original carb in the mean time. Where the feck I put the throttle tube I have no idea, well I did know where it was but must have moved it when I was tidying up.

Sorry to hear Hew, hope you'll be sorted to 'new' soon.
How many miles - a rough guesstimate - did you do with that TM?
Also, did yours indeed backfire at times?

Quite frankly I'm somewhat reluctant to believe this Mikuni's not up to scratch, and I'll definitely will not "just" accept it, it's a too-old well established brand for this.
Mind please, I trust you & your posts, you're one of the more reliable chaps here - a compliment indeed, and know that part of what you ever wrote was the reason I also have a TM40 with which I'm as happy as that proverbial pig

Yeah sure, I don't ride enough, hence me asking the above I think somewhat important info.

I don't really know as the speedo has not worked consistently for a long time. My guess is that in road miles it is not huge, possibly as little as 10000 but in dirt bike terms that is a fair amount of hours. I am not aware of any backfiring, other than when I have been kicking it over to clear it but then the throttle is fully open and the slide up out of the way.
I'm still waiting for the new slide to arrive but have got the bike started using the original carb and all seems well. I've not found the original throttle tube so cant take it for a ride but have fitted a Spal fan to the rad during the down time. That should help with cooling in sticky conditions.

I've loved the performance of the TM40 since it was fitted, especially when snapping the throttle to lift the front wheel over logs or up rock steps and have no desire to go back to original. A new slide will get it back on the road but there will be a big question mark in my mind of when is it going to do it again. Once the new slide is in it will be possible to check how much wear is in the body and go from there. An FCR is a possibility but even used ones are not cheap.

Good news is that there was no noticeable wear in the engine but such a shame to have to open Mr. Hondas work. With luck my Husabang training will mean that I have lost nothing in the rebuild and it will be business as usual soon. Absence makes the heart grow fonder and l have been drooling looking at all the photos on the facebook groups of the big pigs out on rides.

As I said in the original post just take some time to check the slide from time to time. The carb does not have to come off the bike, just tilt it over and pull the slide out.You cant see it in the photo but there is a crack matching the broken off piece on the opposite side. If it all looks good then there is nothing to worry about. The TM will be going back on my bike, at least for a little while.

Mauser wrote:Have you asked the manufacturer as to why the part failed ?, they "might" come back and say fatigue or design flaw ?, send them a nice email praising their goods and show them the pictures ?

Allens performance are the UK importer of Mikuni and offer great service. I am sure if I had bought the carb off them they would want to investigate but unfortunately the carb was a lightly used private import from the States.
Good point though and there is no cost to an email so I will look up Mikuni and get one sent.

Seen the video some time back, mines OK with stock carb, guess she does get the bog down when I hit the throttle....got me thinking about swapping mine now lol.....

Better know in advance (you prolly do already) that an FCR is loads more difficult to jet correctly than the TM. And not only that, there's way less data available on the net, compounded/complicated by the fact that there's many types & sizes of FCR out there.
Not so with the TM40, I think they're all the same but for the choke operation mechanism.
As a last, out in the boondocks I rather strip a TM if I need to, it's simplicity itself.

Yeah, if you want the last grain of power the FCR's the better carb, however that does not make the TM a bad carb at all, in fact it's quite a good one indeed.
I choose the TM40 because it's a good & simple pumper, plus it's a 'real' brand rather than opting for that shite Edelbrock..... weird carb indeed.

I'm sure you'll let us know!

Whilst I waited for the new slide I had the bike back up and running using the original carb just to check it out whilst I waited for the slide to arrive.
Bike was running fine but I did not take it out for a ride. The new slide arrived this week so the mikuni is back on and a run up the road shows that all is well.
I'll just have to keep checking the slide as well as ads for FCRs

Why not add an inline screen filter...then when the carb falls to bits it will get caught in the filter not the motor

failing that go back to stock....mine hasn't fallen to pieces yet lol....

I must admit that I did think of going back to stock but the video I posted above reminded me about how much better it responded with a pumper carb.
The video below is something I thought would never happen, a Honda getting a tow from a Husabang.

if ever at that point I'll accept a tow from a Landrover even!

Call me brain dead or just downright pig headed but i am still using the stock carb from the day i bought my xr ( 2004 ) after initial rejetting,uncorking has been trouble free ever since

beaver350 wrote:Call me brain dead or just downright pig headed but i am still using the stock carb from the day i bought my xr ( 2004 ) after initial rejetting,uncorking has been trouble free ever since

Had mine running great for 9 years now....no problems

100,000+ miles and no issues on my stock carb that's mostly dirt riding from dirt roads to trails, to ATV and singletrack. SmartCarb was working on a carb for the XR650R, I haven't talked to the owner in awhile but if I ever get one I'll post up how it works, works great on my 2-stroke.

I played around with the settings on the stock carb and had it running fairly well before I changed to the mikuni. On the first test ride with the mikuni on I could not get the smile off my face. If you are happy with standard carb best not try a bike with a pumper fitted.

The same can be said for the forks. They were a pile of shit for the riding I do when I first got them, drilling the valves and a change to 2.5 weight oil along with clicker setting got me pretty close to ideal. With well set up CRF forks fitted, again I could not get the smile off my face during the first test ride.

I have rebuilt the engine replaced the Mikuni slide and will cross my fingers each time I ride until its replaced with an FCR in the distant future. Honda fit the FCR to CRF's so they must be reliable.
Why don't Honda bring out a new XR650R with 6 speed box, pumper carb, good suspension and of course the electric start it, it would knock any other dual sport bike into orbit.

ooooopsssssss did i say that, long live stock carbs

And just to add yeh i agree 6 speed gearbox and electric start, i am getting to that stage in life my right leg is not as young as it used to be, actually the rest of me is getting pretty shagged too.