So I've only owned one XRR and need some input on finding the source of a very faint and minor issue.  My concern is that it could become a big problem if its something minor and doesn't get fixed.

So at high RPM's ( I know, shame on me right? ) my motor gets rough.  It runs just fine. Idles just fine. Revs just fine. Everything appears to be fine.  It just starts to vibrate really rough and feels like power drops off but I'm not sure how much of that is psychological.

I don't know what it could be. Unbalanced crank? Funky counterbalance? I have no idea.  Eddy's 650 is butter smooth in the high RPM's and when we swapped bike the other day it became really noticeable.  Bottom end and mid range performance and vibrations are awesome.

I just cant put a finger on what it could be and will likely live with it until the engine blows before I split the cases just to have a look around.

HIGH RPM's ummmmmmmm you have just answered the question yourself, anything mechanical will die if you thrash the guts out of it long enough

sounds like it's valve bouncing and screaming for mercy, put it out of it's misery REBUILD

Engine been opened Master?
If so then perhaps there's a chance the balancer shaft has been timed off a tooth?

The vibration felt to come on around 5000 and up, its subtle just a little more buzz than the lower end. Below 5k your motor is super smooth, I think my motor is just more abused and all the high points have been ground off from abuse

To the best of my knowledge the engine has never been apart. Like Eddy and I have said, its not horrible but it is there. I'm not revving the piss out of it, I'm just riding it like a normal supermoto.

Where is the balancer? I don't have my manual near by. Do you have to split the cases to get to it or is it under a left or right crank case cover?

Its down in front of the crank, I don't know of a way to verify the index of the balancer except to pull it apart.  I would think if it was a tooth off the vibrations would be pretty extreme. 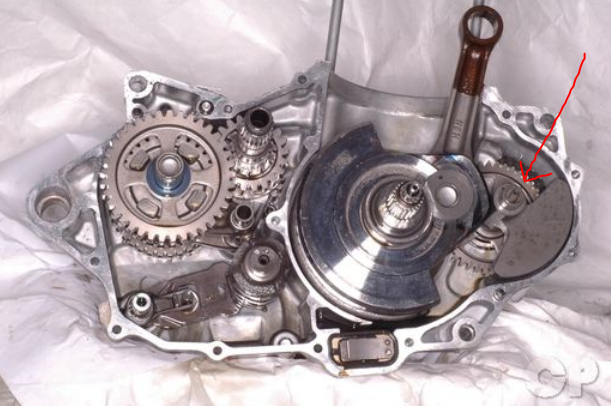 Similar topics
» knocking & where can i also get a engine rebuild kit for a briggs & stratton 21.5hp vtwin?
» RCGF 45cc Petrol Engine
» Tecumseh engine
» Pickering High School Ball Team On THE SCORE
» How man cc is an 11hp engine?